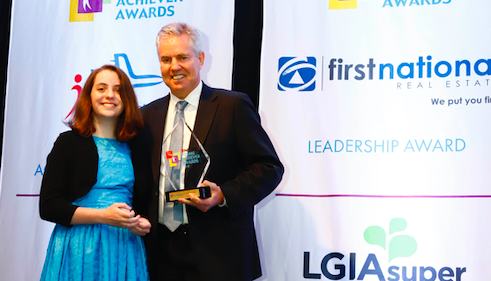 The winners were announced on Friday 3 May at Royal on the Park Brisbane, hosted by Max Futcher and Katrina Blowers from Seven News.

400 guests gathered from across the State including official guest, The Honourable Di Farmer, Minister for Child Safety, Youth and Women and Minister for the Prevention of Domestic and Family Violence, to celebrate our high achievers.

Evie Marshall, 13 of Palmwoods successfully campaigned for Australians with cystic fibrosis, to have access to a life-extending medication called Orkambi. Costing $250,000 per patient per year, the medication was rejected by the Pharmaceutical Benefits Advisory Committee.

Evie became a key driver in gathering national support while managing her own CF. She talked to politicians and wrote letters to the Minister of Health and the manufacturers of Orkambi. After three years of campaigning, the medication was finally recommended and is now sold at $39 per patient per month. As a result, over 1,300 Australians with CF can now live up to 20 years longer.

Winners each received a magnificent trophy and $2,000, courtesy of Auswide Bank.